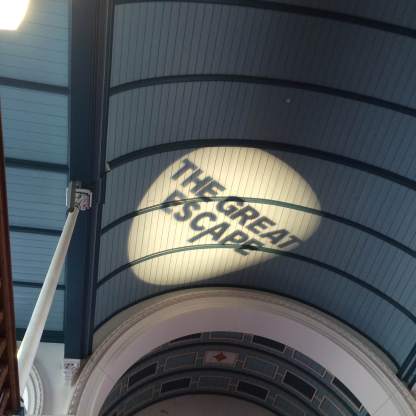 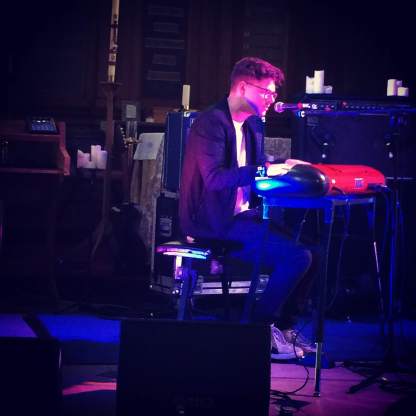 With roughly 300 gigs across 30 venues throughout the city, The Great Escape presents myriad opportunities for discovering new music. So while it was difficult choosing what to see at this festival and industry convention deemed Britain’s SXSW, Kevin Garrett was one of the first additions to my festival planner and I was determined not to miss him.

So it was on Friday evening that I head east along the coast to St George’s, an imposing Anglican Church dating from the 1800s. This venue has recently seen Bat for Lashes and Benjamin Clementine perform, among others, and holds an impressive 3,000 people (although tonight it’s a little less full).

Kevin Garrett is 25 and comes from Brooklyn-by- way-of-Pittsburgh. His moving lyricism and top-class musicianship have been displayed in numerous projects recently and he’s shared the stage with the likes of James Vincent McMorrow, Emily King and Norah Jones. His debut EP ‘Mellow Drama’, which includes songs ‘Coloring’ and ‘Control’ received critical acclaim, although he is relatively unknown on these shores. When I first discovered him last year (on a random Spotify playlist) he immediately stood out.

Garrett, playing solo tonight, sits straight down at his keys in the eloquently lit altar and launches into his first song. This is Garrett’s “Brighton debut” as he reticently announces, two songs in, and after some obligatory jokes about the British weather, he precedes with a half hour set of his eclectic blend of pop, R&B and soul. While his solo set lacks some of the energy a backing band would bring, it actually suits the serene setting of the church and he keeps the entire audience engaged throughout. His heady and resonant vocals really carry in the space, while sorrow colours every word he sings. It’s a moving set.

There’s another Garrett doing particularly well on this side of the pond at the moment (Jack, the London-based singer, producer and multi-instrumentalist) but personally, I prefer this one, who just sold out St Pancras Old Church in London the Monday just gone. And that may just be a sign of things to come.

Stirring new material from @jeremytuplin at @theempirebar was our Friday night jam! ❤️ . . Shout out to our new photographer, @arturas.niko who’s gorgeous shots of Jeremy, and his Ultimate Power Assembly, capture their chemistry down to a tee! ✌️ . . . #jeremytuplin #singersongwriter #writer #poet #musician #dreamy #asalways #oneofourfavorites #ahem #no1fan #notgonnalie #bloggers #writers #photographers #bandphotography #gig #reviews #spiralmagazine #wordpress #blog
Sharing a conversation with @saschaosborn at the @poetrycafelondon recently was like listening to her music; instantly warm and soothing, and as though being hugged 💛🤗🌻 . We discussed everything from living life’s mystery, thriving on people and their stories, to the power of expression and vulnerability! . Follow the link within our bio 🙏 . . . #saschaosborn #singersongwriter #writer #poet #jazz #folk #music #interview #music #writers #bloggers #expression #vulnerability #love #whenlovefindsyou #bevulnerable #letlovein #believeinyourself
Seeing @jeremytuplin at @oldstpancras (19 Sept) sure was a night to remember! 🌠 St Pancras Old Church is not only one of the oldest sites of Christian worship, but home to some fascinating literary connections! 📚 I stumbled across many a grave stone, but Mary Wollstonecraft‘s, though I did have a graveyard meet with Mr Tuplin - take a read of our conversation via the link in our bio! 🙏 And don’t miss his warm and Christmassy gig next Sun 8 Dec at @sunand13cantons 🌞✨ . . . #jeremytuplin #singersongwriter #writer #poet #alternative #musician #pinkmirror #album #creator #literary #london #maryshelley #percyshelley #wollstonecraft #feminist #equalityforall #dickens #taleoftwocities #stpancras #church #ifwallscouldtalk #spiritual #beauty
Follow Spiral Magazine on WordPress.com
%d bloggers like this: